I often write reviews of products I purchased or products of which I have an expert opinion, but I do not write paid reviews or accept products for free. I do get offers but I turn them down. When I link to products I only earn commissions if someone buys and keeps the product. 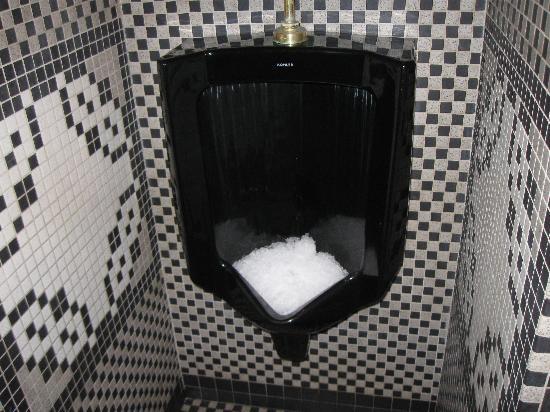 This photo of Shoji Tabuchi Theater’s typical urinal is courtesy of TripAdvisor. David did not work there. But yes, you can find work in Branson, putting fresh ice in urinals.

How some of the maintenance guys I knew got jobs and kept them, and actually prospered in those jobs, I will never understand. I’m a smart guy and I worked hard at my jobs and I had trouble finding work, while these people screwed everything up and were somehow golden. But hey, that’s life, maybe that sort of person fits the mold of maintenance man better than I did. David, the hero of another story, was one of my favorites and actually had two jobs and owned a couple of rental houses as well. Go figure!

David’s second job was roving maintenance for the local outlets of a convenience store and gas station chain in Branson. I stopped at the one south of town almost every day because I only remained conscious at work and on the drive home from work by drinking massive quantities of high-caffeine Mountain Dew, the diet brand. If I timed things correctly I’d be approaching a bathroom moment at the same time I approached the southern convenience store. Lots of people were the same as me and there was always a full house and then we bought treats. You need a treat after a full day at minimum wage in Branson. You deserve a treat. I liked the banana-flavored moon pies even though they only vaguely tasted of bananas. Mmmmmm, spongy and sweet. Makes you think of childhood when people were telling you, You’d better enjoy life now, dammit! because someday you’ll have to go to work! Everyone heard that from the adults around them, right? Enjoy it! Enjoy it now! You’d better do as I tell you and enjoy it!

Next in importance to the bathroom in this convenience store were the candy rack and the soda cabinet. Everyone hit the bathroom first though, because when you’ve been drinking coffee and Mountain Dew all day there is little time. One day, when I arrived at this important facility, the urinal was stopped up and the stalls were all busy. So I did what must be done anyway and clearly many people had done this before. I’m sure that all of us expected this to be fixed the following day, but it wasn’t. After a week of this there were changes. David actually completely removed the urinal, leaving a hole in the wall at a convenient height with a sign taped over it that read “Out of Order!” Desperate men think alike, though, and we concluded that a hole cannot be out of order.

This is actually far worse than a mess on the floor, because you can actually mop up a mess on the floor, and you can’t mop up a mess inside the wall. Inside the wall it just lingers and builds, and the smell changes from day to day, constantly becoming worse until it permeates the entire building. The wall in question happened to be right behind the soda cabinets, and when you opened those doors the stink hit you so hard that people would actually step back in shock. Then of course they would grab a soda anyway because the next caffeine stop was miles south, in Arkansas. Who can drive that far without caffeine? Not anyone who worked in Branson, that’s for sure.

After weeks of this the problem still wasn’t fixed, although I did see David there a couple of times chatting up the girls who worked the counter. The smell grew and grew until you could almost see the cloud in the air, and one day as I was on my way home and I bit into my banana Moon Pie, the soft marshmallow filled cookie of the Deep South, I noticed an odd flavor. It tasted strangely like pee. Not even like fresh pee, it tasted like old stuff.

Contamination of the Moon Pie counter must have been the final straw, because only a few days later someone — definitely not David — tore out the wall and cleaned things up and installed a new urinal.

Welcome to the Marked Tree!

We are a participant in the Amazon Services LLC Associates Program, an affiliate advertising program designed to provide a means for us to earn fees by linking to Amazon.com and affiliated sites.

Copyrighted Content: All original material on this site is the sole property of the author and cannot be reproduced in any form without his express permission. You are welcome to ask. Advertising: I no longer belong to Google Adsense so Google will not be scanning your activities here unless you are using Chrome Browser or Google Search.
Avatars by Sterling Adventures
↑

This function has been disabled for The Marked Tree.